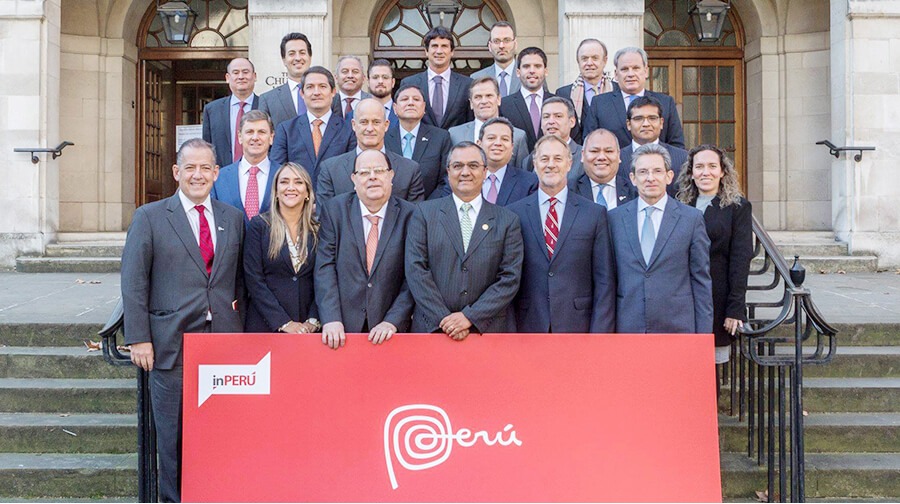 Between February 25 and 28, government officials and representatives of the Peruvian economic sector met with their peers and European businesspeople in the framework of Road Show Europe 2019, a business tour that aims to attract foreign investment and manage opportunities in the capital market.

The first exhibitions and meetings were held in London on February 25 and 26. Over these two days topics were addressed such as the importance of Great Britain's investment in our country, Brexit, the upcoming Pan American Games in Lima, and many others.

The Minister of Economy, Carlos Oliva, headed the Peruvian delegation and during his presentation he indicated that if the Peruvian economy has grown in the last two decades, it is thanks to macroeconomic stability and increased public and private investment. Oliva also said that about 14 billion dollars are committed in investment and will be implemented this year, basically for the mining and infrastructure sectors.

"Peru maintains stable indicators, a strong institutional framework and economic growth that stands out among the countries of the region. We are sure that foreign investors see Peru as a country in which large investments can be made in various areas. We have a significant portfolio of investment projects between 2019 and 2021 which amounts to more than 10 billion dollars," Oliva explained, adding that in the coming years poverty is expected to be reduced from 21 to 18%.

Julio Velarde, president of the Central Reserve Bank of Peru (BCRP), pointed out that Peru is the only country in the region that has shown continuous growth over the last 20 years and enjoys a low public debt, as does Chile. "We believe that public investment will reach 23 billion dollars by 2019-2020," he said.

The following two days, the Peruvian officials and representatives moved to Spain, where they discussed, among other things, the importance of Spanish investment for Peru. In this sense, Oliva claimed that, according to June 2018 figures, Spain is the leading country for foreign direct investment in Peru, representing close to 18% of the total.

The Spanish Minister of Industry, Trade and Tourism, María Reyes Maroto, commented that our country is the fifth most important in all of Latin America in terms of Spanish investment and is where more than 600 Spanish companies are located. Reyes Maroto highlighted the importance of the signing of the Free Trade Agreement (FTA) between Peru and the European Union in 2017, which achieved a trade volume of 10.2 billion dollars.

The panel "Opportunities and Perspectives Peru – Spain" was also held in the Spanish capital. The panel was made up of Julio Velarde, president of the BCRP; Marta Blanco, president of CEOE International (Spanish business guild); Marco Antonio Zaldívar, vice-president of CONFIEP and Eduardo Torres Llosa, CEO of BBVA Peru. In this presentation, the new sectors that interest Spanish business were presented: renewable energies, infrastructure and digitalization.

In addition, Blanco presented the keys to further strengthening Spanish investment: political and legal stability, the reduction of red tape in our country and the activation of the agreement to eliminate double taxation. For his part, Velarde saluted the almost 30 years of flexible exchange rate in Peru and recognized that fiscal prudence has been the main reason why our country has been growing for 20 consecutive years.