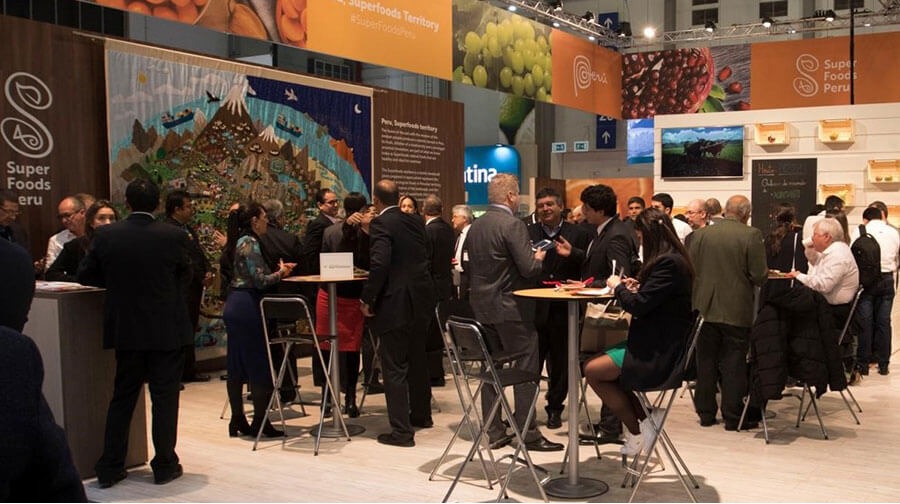 Peru exceeded all expectations at Fruit Logistica 2018. The Peruvian representatives returned from the fair with trade commitments of over US$ 230 million, according to the Peruvian Export and Tourism Promotion Board (PROMPERÚ).

This record figure greatly exceeds the initial estimate for the 300 Peruvian business people, who made more than 7,000 business contacts while taking part in the world's leading trade fair for fruit and vegetables, which took place from February 7 to 9 in Berlin, Germany.

Buyers from Germany, Argentina, Australia, Belgium, Canada and China were the most drawn to the Peru pavilion, which was exhibiting an interesting and varied range of national super foods.

The Peruvian products that roused the most interest among foreign buyers were grapes, avocados, mangoes, bananas, pomegranates, onions and ginger. Additionally, blueberries, asparagus, passion fruit, snow peas and mandarin oranges were also on show and were very well received.

Owing to the success of the Peruvian stand, the directors of the Fruit Logistica trade fair have recommended increasing the size of the Peruvian pavilion for 2019, which currently occupies 512 square meters.

It should be noted that this year Peru began the second stage of the international Super Foods Peru campaign, which consists of brand activations that will allow industry professionals and end consumers to become familiar with the virtues and superior quality of Peruvian products.

During the trade fair, a wide range of activities was held to promote and position Peruvian super foods, such as seminars, talks, tasting sessions, cocktail parties, and much more.

The involvement of Peruvian businesses at the Fruit Logistica trade was led by the Ministry of Foreign Trade and Tourism, PROMPERÚ, and the German-Peruvian Chamber of Commerce and Industry, with support from Peru’s Foreign Trade Office (OCEX) in Hamburg, the Peruvian Embassy in Germany and the Association of Peruvian Growers Unions (AGAP).