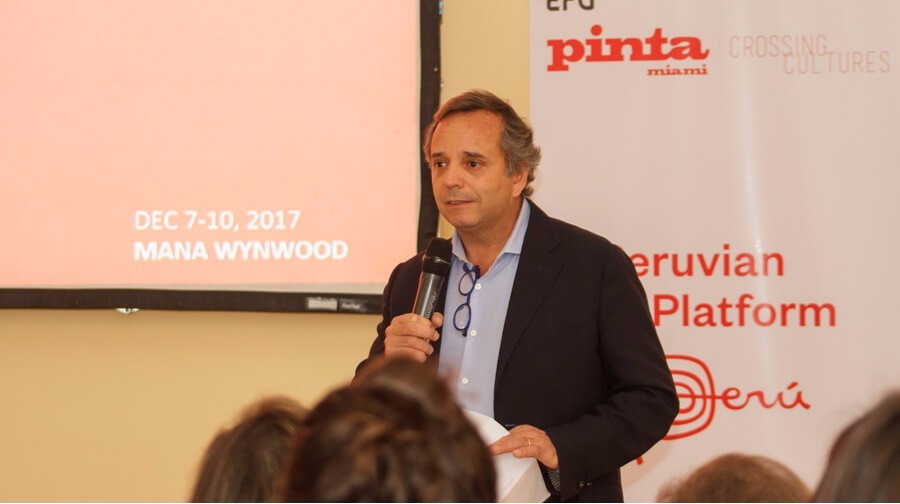 The “Pinta Miami” modern and contemporary art fair takes place on December 6-10 at the Mana Wynwood convention center in Florida. The event brings together galleries from all over the world to include attendees in a conceptual dialog between different countries, cultures and genres.

One of the novelties at this year’s event is “Pinta Country Sections,” a space created as a platform for artists and works that represent different countries. Peru is proud to participate in this unmissable exposition with “Pinta Perú.” The showing will be put together by well-known Peruvian curator, researcher and art critic Max Hernández Calvo. Calvo has received the Cisneros Scholarship for Latin American curators (2005 – 2007), and has also curated expositions and published articles on contemporary art in Latin America, the United States and Europe. In 2015, he was chosen to be the curator of the Peru Pavilion at the 56th Venice Biennale. He is currently a professor and researcher at the Art Department and on the Art History and Curatorship Masters Program at the Pontifical Catholic University of Peru.

“Pinta Perú” was able to participate in this art fair thanks to the support of the Peruvian Export and Tourism Promotion Board (PROMPERÚ).The exhibition brings together six galleries to share the new art scene coalescing in our country. The new scene’s diversity and vitality can be glimpsed in a series of projects by young artists who, along with some more established members of the art community, reinterpret multiple local references (ranging from historical to current events) and express them through contemporary art.

In addition to the exhibition, Pinta Perú will also present the book “77 artistas peruanos contemporáneos” (77 Contemporary Peruvian Artists), published by the Mario Testino Museum (Spanish acronym: MATE) and the activation of “El Camarín” by MYOPIA.

Other sections to be presented at Pinta Miami 2017 include the customary “Solo Project,” which this year turns into a “Solo-Duo” project; “Geografías Errantes” (Errant Geographies), the result of the collaboration between world-renowned curators Dan Cameron and Jesús Fuenmayor. Another new initiative at the fair is PINTA PLATFORMS. This innovative section will be devoted to providing additional visibility to modern and contemporary art contributions.

Since its successful launch in New York in 2006, the fair – the most important event of its kind – marked a turning point in both the perception and overall impact of the scope of Hispanic American art since the 20th century, as well as in the increased visibility of key figures that PINTA introduced to the United States in a deeper and more widespread way.