The Peruvian cajón fills us with pride 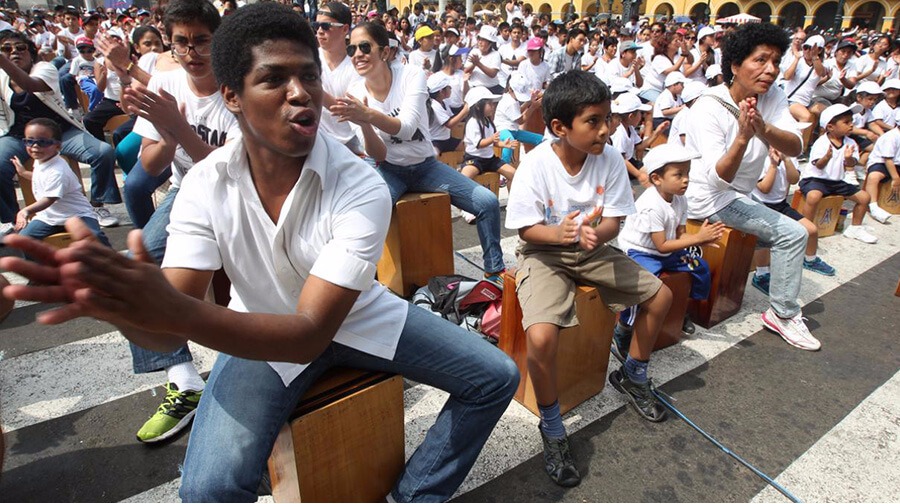 On April 14, 2013, Peru left its mark in the Guinness Records with its Peruvian cajón ensemble. On that day, 1,524 Peruvian cajones flooded Lima’s Plaza Mayor with music, breaking the Guinness record for the most people playing the instrument at the same time. The previous year, 1,476 people assembled to break the existing record.

The Guinness World Record organization presented the certificate of having fulfilled the requirements to break a new Guinness Record.

Rafael Santa Cruz was the musical director of the festival, which proved that when Peruvians join together, we can achieve great feats. The 6th International Peruvian Cajón Festival was attended by musicians such as Marco Romero, Julio Andrade, chef Christian Bravo, as well as members of congress Gabriela Pérez del Solar and Leyla Chihuán.

The organizers of this musical event showed that the cajón is one of Peru’s most emblematic instruments, especially in Afro-Peruvian culture, and it was given National Heritage status in 2001.

Marca Peru is proud of these events that have put the country on the map.

History of the Peruvian cajón

The Peruvian cajón is the only Peruvian musical instrument that the musician can sit on. Its popularity increased with the growth of music genres such as jazz, new flamenco, and Afro-Latin-Caribbean music. The cajón is thought to have existed since the 19th century.

This instrument was developed specifically on the Peruvian coast and accompanies the guitar, in the criolla tradition. The origins of the Peruvian cajón are thought to be at the end of the colonial period, when the Spanish prohibited black slaves from playing their drums because the Catholic Church considered it to be a pagan practice. In response, they decided to create the cajón as a new musical instrument.

The African slaves, unable to play their unique drum, decided to use the wooden boxes intended for the transport of goods. They used the cajón in some of their ceremonies and artistic expressions.

Parts of the Peruvian cajón

Today there are different shapes of cajones and different types of wood are used to make them. The standard measurements are 45 cm high, 35 cm wide, and 20 cm deep. Three-ply 12 to 15 mm thick wood is used, with wooden covers (rear) that are usually secured with glue and nails to create a deep sound. The front base is thin, and this is where the percussionist strikes his fingers or cupped palm, to generate the basic sound of the cajón.

The Peruvian cajón has different sounds and variations.

Deep sound: this is created by striking between the center and top of the box.It can be played with a flat or cupped hand.

High sound: this is created by striking the wood at the top of the front of the box.The sound is obtained with the hand relaxed, fingers apart, and playing at a slight angle, so that the pinkie finger strikes first and the index finger last.