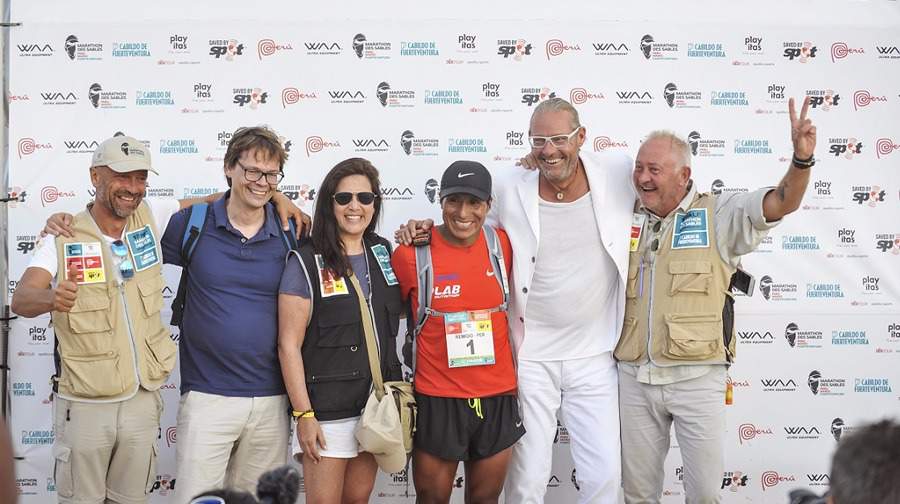 After four days of extreme competition in the Fuerteventura desert in Spain’s Canary Islands, distance runner and Peru Country Brand ambassador Remigio Huamán was the first to reach the finish line of the half-length Marathon des Sables ultra-marathon, according to the Peruvian Export and Tourism Promotion Board (PROMPERÚ).

The Peruvian endurance athlete navigated 80 miles of sand and rocks that put his stamina to the test.

229 people from 40 countries participated in this extreme race, which took place from September 26 to 29. The competition lasted four days and was broken up into three stages. Each athlete had to run carrying enough food for all four days of the race.

This was Remigio Huamán’s second time racing a Marathon des Sables (which translates to Marathon of the Sands in English). Last April, he ran to a fifth-place finish in Morocco. This is part of the ultramarathoner’s training for the Marathon des Sables Peru, which traverses the unparalleled landscapes of the Nazca and Paracas deserts in Ica.

The Marathon des Sables Peru race will be held in Ica from November 26 to December 6 of this year. 300 athletes from all corners of the globe will cover 155 miles of ground in six stages.

PROMPERÚ is using this race to position Peru as an ideal place for adventure sports and as a backdrop for different kinds of high-level sports competitions, because of its unique landscapes that pose a challenge participants will find nowhere else in the world. These events will provide a direct boost to the economic development of the local communities that host them.

According to the organizers, the race will be covered by more than 50 international journalists from the United States, Brazil, Japan, Mexico and Europe, who will closely follow the contest as it unfolds, guaranteeing international media coverage for Peru.

Marathon des Sables (MDS) is one of the world’s most brutal long-distance footraces. First held over 30 years ago in the Sahara Desert in Morocco, participants cover 150 miles in temperatures pushing 120 degrees, carrying their equipment and food for the entire race.

Over time, this elite ultramarathon has taken on mythical proportions for top-tier athletes around the world, who dream of having a crack at this unrivaled trial of physical and mental stamina.