The Sacred City of Caral: The world surrenders to its technology 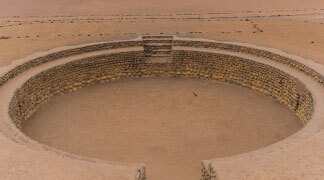 The center of one of the world's most ancient civilizations is located in Lima, Peru. The Sacred City of Caral is found in the Supe Valley, in the Barranca Province, and is over 5,000 years old, making it a contemporary of the Mesopotamian, Egyptian, Indian and Chinese cultures.

As regards its architecture, the Sacred City of Caral is a complex made up of different buildings and whose location, on a terrace, was strategically chosen to protect it from natural disasters. In its construction stones and wood from dead trees were used - it was not necessary to cause damage to the surroundings, and as such the environment was protected.

Its mysterious circular plazas and the six Caral pyramids are the most intriguing attractions of this ancient culture. Its inhabitants, who relied entirely on fishing and agriculture to survive, had a hierarchical order and an organized social structure.

Technology of the Caral culture

Being far from other civilizations, the Caral culture managed to get ahead of other Mesoamerican cultures by approximately 1,800 years. Its scientific and technological development was demonstrated by the creation of new agricultural techniques such as the construction of irrigation channels. Remains have also been found confirming that weapons were produced in Caral, so perhaps an army could have been organized or a war could have been led during the time it was inhabited. Other technological evidence that surprised researchers was the planning of climate calendars and knowledge of natural medicine. Finally, the oldest quipu (a rope system with many knots and colors used to record information) in the world was found, along with 32 flutes made of condor and pelican bone.

The Sacred City of Caral was declared Peru's eleventh "World Heritage Site" by the United Nations Educational, Scientific and Cultural Organization (UNESCO) on June 28, 2009 in Seville, Spain. The foundations for it being considered a cultural asset of "outstanding universal value" are its age, incredible architecture (city plan, pyramid structures and residential areas of the ruling class) and urban area.

The impressive and complex architectural elements of the Sacred City of Caral make this archaeological site one of the biggest tourist attractions in Peru. Located in the Peruvian capital (182 kilometers north of the metropolitan area of Lima), it is always a great choice for local and foreign tourists who want to witness one of the oldest civilizations in the world. Caral, a unique and unforgettable experience.