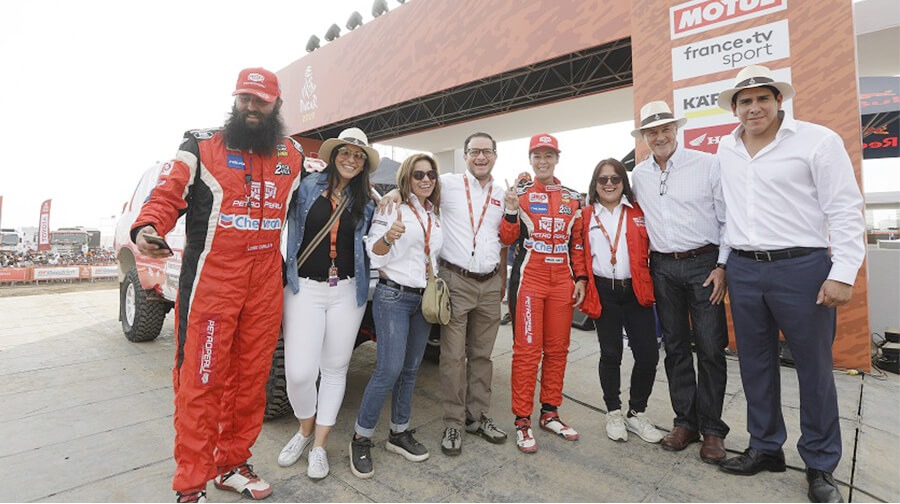 Thanks to the Dakar Rally, our country will be in the global spotlight for eleven days (January 6-17) when its landscapes and tourist attractions are transmitted across 190 countries, generating a media impact of approximately US$ 200 million, according to the Minister of Foreign Trade and Tourism, Edgar Vásquez.

You may recall that this is the first time that the Dakar Rally is being held in a single country and Peru is the chosen setting. The competition organizers have mentioned on several occasions that we offer the ideal terrain for the competition: namely our deserts and difficult terrain, which left a lasting impression on competitors in previous editions.

There are five Peruvian regions (Lima, Ica, Arequipa, Moquegua and Tacna) that will be toured by the 534 pilots and co-pilots of the 61 nationalities who will participate in the most challenging race in the world. An extra fact to summarize the significance of the event: of the various media that transmit the competition, around 70 of them will be broadcasting more than 1,200 hours of television.

Minister Vásquez added that the economic impact of the competition being held in Peru will be US$ 60 million. This figure is US$ 20 million (50%) higher than the results of Dakar 2018 (US$ 40.5 million). Of the total amount to be generated in 2019, around US$ 40.7 million (67%) will relate directly to the tourism sector.

"This means the economy of the regions hosting the stages of this 100% Peruvian rally will be revitalized. It will motivate the consumption of goods and services in areas surrounding the competition route. It will represent an increase of 49% (US$ 60.3 million) in the consumption of accommodation services, food, transport and tourist activities in comparison with Dakar 2018," he said.

The head of the Ministry of Foreign Trade and Tourism, or 'Mincetur', pointed out that our country's interest in being part of the Dakar Rally responded to the significant benefits achieved in 2018. It should be noted that this competition is an environmentally and culturally responsible event, as was also the case at the beginning of last year, when there was no affectation to our cultural heritage.

"The Peruvian government has made every effort to make this competition a successful event, and to guarantee the care of Peru's cultural and natural heritage," he stressed.

There are ten stages in the Dakar Rally. Competitors must overcome a total distance of some 3,100 miles, of which 1,850 are in 'special' sections, notable for their unprecedented intensity and complexity. The first stage will have the city of Lima as its start point, and it will finish in Pisco.

Participants will have to leave Pisco and head for San Juan de Marcona (Ica), and then continue on to Arequipa, Moquegua and Tacna. The rest day is scheduled for January 12, following the Tacna – Arequipa marathon. The race finishes on January 17 in the city of Lima.

•             PERU MUCHO GUSTO FAIR - ILO: From January 11 to 13, the Peru Mucho Gusto Fair will be held at the Mariscal Nieto Stadium in Ilo (Moquegua).  Due to the large influx of tourists generated by the Dakar Rally 2019, this event will seek to promote national cuisine, inter-regional tourism and border tourism from Iquique and Arica (Chile), with special emphasis on the southern regions of Peru. 27,000 attendees are expected and there will be 60 exhibitors.

•             FINAL PODIUM OF THE COMPETITION: Next Thursday, January 17, will be the final day of the competition. Thus, at the Dakar Fair in Lima, on the Costa Verde in Magdalena, Dakar heroes of all categories - cars, quads, motorcycles, SxS and trucks - will be awarded.