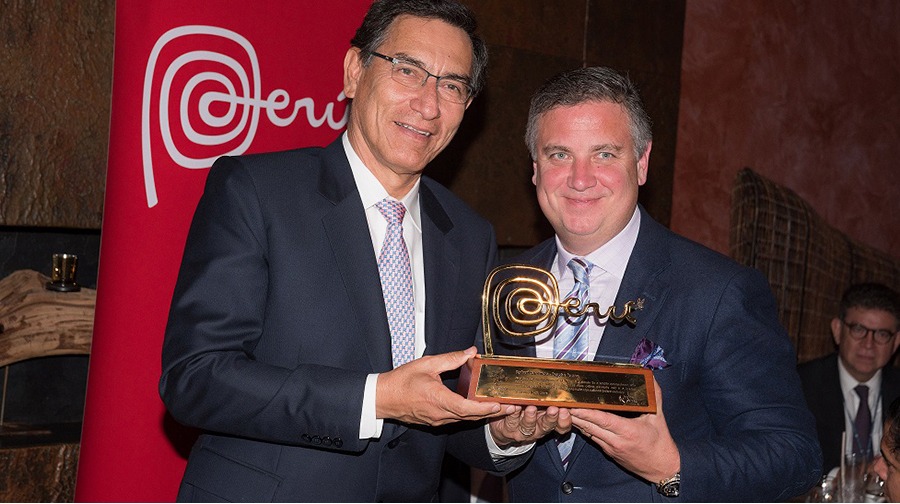 Four notable figures from the United States – three importers and a Peruvian culture researcher – have just won the 'Friend of Peru' award. President Martín Vizcarra presented the honor as part of his participation in the United Nations General Assembly and the Pacific Alliance Investment Forum in New York.

The 'Friend of Perú' award was created by PROMPERÚ through the Peru Brand ('Marca Perú') and is granted to foreign personalities who have a close bond with the country, demonstrating great relations in which commitment, respect and admiration for Peru are prevalent. The winners, through their talents, products or works, must promote our resources, landscapes and culture.

On this occasion, three of the winners were businesspeople who import Peruvian products to the United States. One of them was Robert Goldman, from the 'Psycho Bunny’ clothing brand, which produces 85% of its collections in Peru and its purchases today reach US$ 6 million. The other two were George and Robert Gellert from the food distributor Atalanta, which buys more than US$ 50 million annually from Peru, including artichokes, mangoes, preserved vegetables and quinoa.

"Peru has much to offer the world and, thanks to these four people, our textiles, agricultural products and historical legacy can reach more people. For this reason, tonight we have the great honor of acknowledging their commitment to Peru in each of their disciplines," said President Vizcarra during the event, which was also attended by the Minister of Foreign Trade and Tourism, Edgar Vásquez, and the executive president of PROMPERÚ, Luis Torres.

At the event, President Vizcarra gave each of the new 'Friends of Peru' a suitcase from PROMPERÚ's recent 'Message in a Suitcase' campaign, which seeks to increase the arrival of international tourists to Peru. These suitcases have been presented to a number of world celebrities, such as actors Diego Boneta and Ricardo Darín, Peruvian tenor Juan Diego Flórez, and the American athlete Carl Lewis.

About “Friend of Peru”

This honorary recognition has been awarded since late 2016 to renowned individuals who support Peruvian products in their various activities.

The first to receive it was the distinguished Spanish pastry chef Jordi Roca, from the restaurant El Celler de Can Roca, who uses Peruvian cocoa in his creations. The restaurant is considered one of the best in the world.