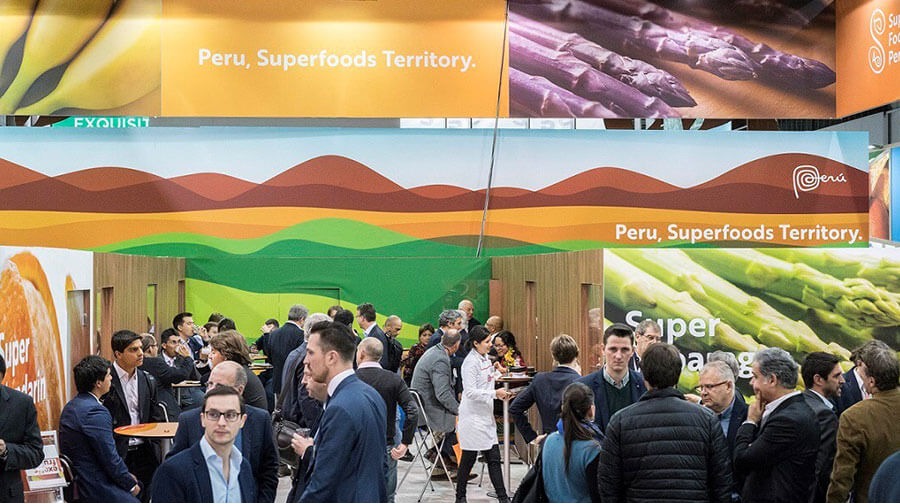 Peru had a strong showing of more than 250 entrepreneurs at the 2018 Fruit Logistica trade show and launched the second phase of its international Super Foods Peru campaign, reported the Peruvian Export and Tourism Promotion Board (PROMPERÚ).

Fruit Logistica - the world’s leading produce trade show - was held for the 14th time on February 7-9 in Berlin. The event featured 3077 exhibitors from 84 countries and was attended by 76,238 professionals from 130 countries.

Peru’s Minister of Foreign Trade and Tourism, Eduardo Ferreyros Küppers, said, “One year after the global debut of the Super Foods Peru sector-specific brand, we return here to start the second phase of promotion, which consists of brand activations in two of Germany’s main cities to share more about the virtues of our foods with industry professionals and end consumers.”

He specified that the Super Foods Peru brand will exhibit and organize tastings of its products in major supermarkets in Berlin, Hamburg and Nuremberg. These steps will raise the profile of Peru among the general European public as an excellent supplier of produce and other functional foods. The campaign will also extend to North America, Asia and some Latin American countries.

Ferreyros added that the healthy lifestyle trend is gaining traction among consumers, leading them to buy foods that benefit their bodies and prevent illnesses. Peru has become an important global player in this movement.

Products to be showcased and shared include blueberries, bananas, asparagus, pomegranate, passion fruit, snow peas, ginger, mandarin oranges, mango, avocado and grapes, all of which have been in high demand in Europe in recent years.

The Peruvian contingent’s agenda for the fair includes activities like seminars, a pavilion opening ceremony, and tastings.

As a result of this participation, Peru is expected to surpass the US$ 220 million in prospective business generated in 2017 with the launch of the Super Foods Peru brand.

Peru’s involvement is spearheaded by the Ministry of Foreign Trade and Tourism, PROMPERÚ, and the German-Peruvian Chamber of Commerce and Industry, with support from Peru’s Foreign Trade Office (OCEX) in Hamburg, the Peruvian Embassy in Germany and the Association of Peruvian Growers Unions (Spanish acronym: AGAP). Actions have also been coordinated with the Peruvian Embassy in Germany.

Minister Ferreyros also announced that at the trade show in Germany, Peru will be unveiled as the host of the Global G.A.P. Summit 2018 on November 5-8. More than 450 foreign delegates and 70 exhibitors from 50 countries will attend this event. The 2018 summit will be the international event’s Latin American debut, which underscores Peru’s international prominence in the industry.

The summit is held every two years in a different country and fosters dialog among the global community regarding the latest developments in food safety and sustainability, as well as good agriculture and aquaculture practices and the future of the industry. Global G.A.P. is one of the most widely used quality and safety certifications in the world, with more than 175,000 certified growers in more than 125 countries.

It is important to note that Peru’s agribusiness exports totaled US$ 4.43 billion in the first 11 months of 2017, a 9.3% increase over the same period of the previous year and a 11.2% rise in its share of the nontraditional export sector.