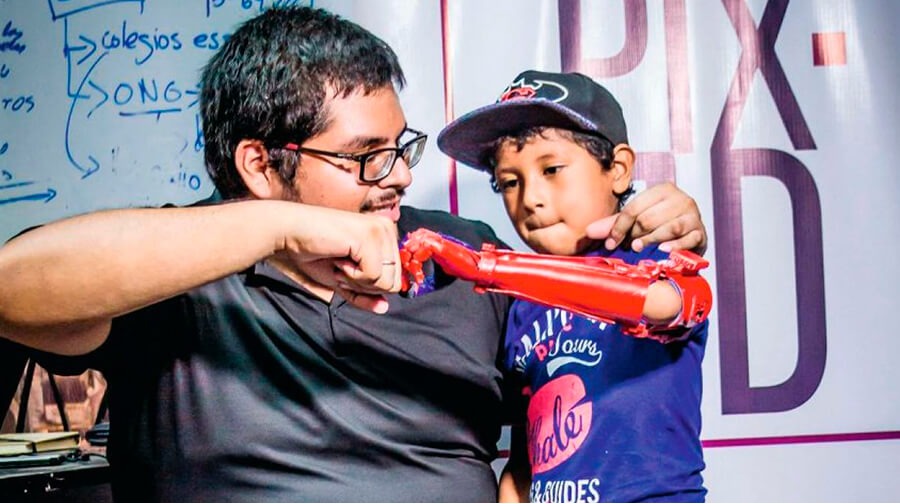 With this award, MIT seeks to recognize the innovative work that young Latin Americans under 35 have been doing. "When I got the letter, I couldn't have been more excited. Not only because of what the idea of being on that list means, but also because of the fact of having been nominated, that someone has taken the trouble to nominate me, having confidence in me and conviction for what I do and what we do at Pixed," explained Rodriguez Torres.

From Piura to the world

Pixed Perú was created in Piura at the end of 2015 with the goal of helping millions of people with a disability to acquire a 3D hand or arm prosthesis, at a lower cost and in less time, thus giving them new tools and opportunities. "The fact that they have a disability should not isolate them from others," said the engineer from Piura.

The prostheses that are developed in Pixed are custom made to exactly fit the patient’s limb, guaranteeing comfort and good functioning. In mid-2018, they sent their first prosthesis abroad, to Illinois, USA. Currently, the company has dealt with more than 20 cases and has more than 90 cases on the wait throughout Peru and the world.

Ricardo Rodriguez stated that much of the inspiration behind Pixed came from his uncle, who was disabled and always suffered when he ordered a taxi. It was when he began working in an international 3D prosthetics association that he developed his first design and was driven to create his company.

"Pixed is a promise and a dream. A promise to my uncle Pepito, which gradually became the purpose of my work, to achieve an inclusive Peru, where everyone can have the necessary tools to have the same opportunities," added the businessman.

In July 2018, the Social Inclusion Commission of the Congress of the Republic presented him with the "Peru Inclusion" National Award. Three months later, Pixed was one of the ten finalists of the UPC program, Protagonists of Change. In November of the same year, it was chosen over 140 ventures to scoop the Kunan Prize, a competition that recognizes and drives social ventures in the country.

While Ricardo still does not know the outcome of this nomination, he is aware that the most important thing is to continue participating in change and helping to build a more inclusive country. "I don't know what the result will be, I just know that the work we've been doing at Pixed is having an impact on people's lives and this shows that there are people who expect that and more. For me in particular this is already a wonderful and beautiful prize that I will strive not to disappoint, giving my all to continue innovating in favor of society," said Rodriguez.