Super Granadilla: discover the amazing fruit from the Peruvian Amazon 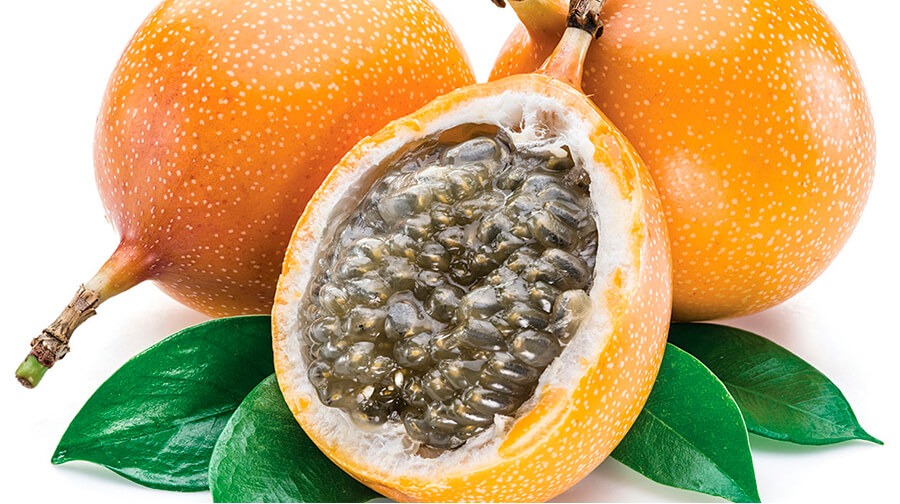 Simple on the outside and exotic on the inside, that’s the granadilla. Also known by its scientific name Passiflora nitida HBK, this fruit grows in the Peruvian Amazon, mainly in the departments of Loreto, Ucayali and San Martín. In order for the granadilla to grow, it must be planted in soil with medium fertility (especially with good drainage) and in an environment with a minimum annual bio-temperature of 63 °F and a maximum of 77.2 °F.

The fruit can be picked 7 to 10 months after planting. To find out whether it is ready to be picked, it must have turned from yellow-green to a yellow-orange hue. Since it has very fragile skin, the producers carefully place it inside cotton blankets or burlap sacks to prevent cracking.

Jewel of the Incas

The granadilla was a prized fruit in the pre-Inca period, as well as during the times of the Viceroyalty, as it was an essential element in popular medicine. Its leaves were used to cure illnesses such as yellow fever, erysipelas, gout, hernias, and it was also used to lower the body's temperature. Neither the ancestors nor the colonizers were afraid to resort to the goodness of this fruit to heal their ailments.

In fact, in some regions and communities of Peru it is still considered a basic resource to alleviate the above-mentioned illnesses and ailments. The juice from its leaves is also used to treat typhoid.

But when it comes to food, the granadilla has an unsurpassed source of phosphorus – which helps the growth and repair of cells and tissues in the body and also helps keep the kidneys working properly – and niacin, which, according to scientific data, is used to reduce cholesterol and prevent heart disease.

It is also considered to be a hypoallergenic fruit, which means it is ideal for counteracting the symptoms of an allergic reaction. Meanwhile, thanks to its laxative properties, it allows those who eat it to regulate their digestive system and avoid constipation; it also controls stomach acidity and helps heal ulcers. The magic fiber is stored inside its sticky seeds.

Each form is also high in calcium and iron, which helps to stimulate growth, provide energy and maintain healthy bones. According to nutritional information, it is also a natural relaxant, which is why it can be used to treat problems such as insomnia.

On top of this, there is also a long list of vitamins which are essential for the body, such as vitamins A, B1, B2, B3, B9, E, C (high in antioxidants), K, and provitamin AV.

How to eat it?

The most traditional way to eat granadilla is by peeling it and removing the seeds found inside. But it can also be used as a topping for fruit salads, in juices, cocktails, ice creams, yogurt, jams and gelatin desserts.

Another innovative way of eating it is as a dessert, such as granadilla mousse, in a compote or in a parfait. It can also be used as a pancake topping.

No part of this fruit is wasted. The flower of the granadilla is another tropical treasure which has not gone unnoticed in the world of gastronomy, cosmetics and natural medicine. The pollen from this species is used for consumption by users, and its potential nectar is considered a star ingredient for fragrance producers.

An infusion made with the flower of the granadilla is ideal for calming the nervous system, and has been shown to have positive effects on reducing stress and hypertension.