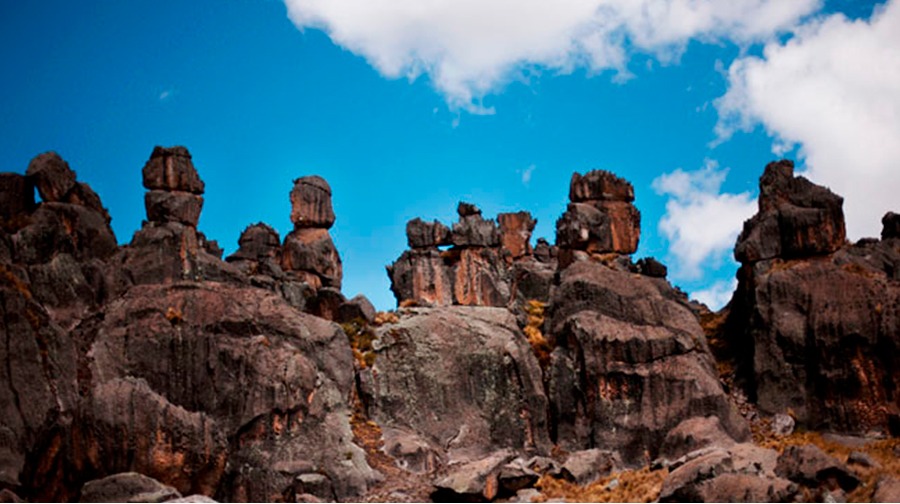 Imposing rock formations, mostly of volcanic origin, and a unique flora and fauna are the main features of the Huayllay National Sanctuary (SNH), located in the Pasco region at an altitude of 13,450 - 14,915 feet above sea level.

Created in 1974, this protected area is located in the middle of Peru's highest plateau, the Bombón plateau. Besides being considered one of the best geological museums in the world, Huayllay houses some important archeological remains; more than 500 cave paintings have been found here, which explains the age-old relationship between man and his ecosystem.

Covering an area of about 15,000 acres, its greatest tourist attraction lies in the diverse figures of the rocks. Animal forms resembling the bear, cobra, alpaca, fish, toad, condor, snail, turtle and elephant, in addition to formations of the thinker, the tunnel, the nuns, the kiss of the bride and groom, the dinosaur, the tourist, the fungus, the face and the figures of the angel, which all stand out for their great beauty and uniqueness.

There is in addition a stunning source of thermal water with healing properties right in the middle of Huayllay, which reaches a temperature of more than 140ºF.

Huayllay is home to bofedales and puquios (types of wetlands), which guarantee the presence of a unique fauna in the area, such as the birds that represent the most numerous species, the most common being the Andean lapwing, the Andean gull, the Andean flicker, the Puna ibis and the ash-breasted sierra finch.

Mammals include the wild guinea pig, the deer, the vizcacha, the skunk or añas, the Andean fox, the vicuña, the wild cat and several species of mice. It is also possible to find fish such as the orestias and the catfish, as well as several species of toads. As for reptiles, there is only one species of lizard in Huayllay, of the genus Liolaemus.

As for flora, the ichu is the most abundant and the main food of ruminants and horses. With respect to tree species, the only one in the sanctuary is the polylepis.

There are also emergent and submerged aquatic species in rivers and lagoons, of nutritional value for the fauna, and star grass grows in the wet zones and bofedales, which is where the inhabitants obtain, as an ancient custom, the peat or "champa" that they use for fuel.

- Every year, in September, the Huayllay National Sanctuary carries out various activities such as the Pachamama ritual, pack llama competitions, Andean scavenger hunts, spinning competitions, tasting of typical dishes, camelid exhibitions; in addition to rock climbing competitions and walks that take in its tourist circuits. This is connected to the Ruraltur activities, which seek to encourage adventure tourism and nature.

- The thermal baths of Yanatuto are another great attraction in Huayllay. There are two pools: one natural one at the top of a rocky slope and the other built underneath, surrounded by cliffs and the landscape. It is possible to camp in the area, subject to coordination with Sernanp.

- Due to its size and the type of rock formations, the Huallay National Sanctuary is as impressive as the Garden of the Gods, in the United States, or the Shilin Stone Forest, in the People's Republic of China.