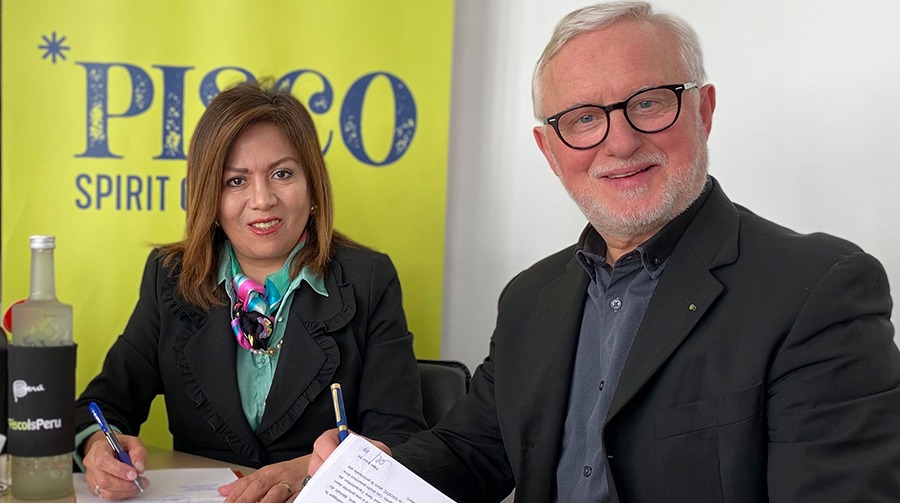 As part of its strategy to promote pisco in Europe, the Commission for the Promotion of Peru for Exports and Tourism –PROMPERU, signed an agreement with the Barmen Association of France for the distribution and enhancement of our national drink on the Old Continent: pisco.

The agreement, with the participation of the  manager of the Commercial Office in France  and the Swiss Confederation, Rosario Pajuelo, and the president of the Barmen Association of France, René Delvincourt, includes quarterly training sessions, as well as the inclusion of the Pisco Spirit of Peru brand as a first-hand reference for this association, founded in 1938.

Find out about the delicious and refreshing cocktails you can make with Pisco Spirit of Peru here.

Through this agreement, pisco will continue to conquer demanding European palates. And from today, it will form part of the select ingredients for making cocktails, as well as for international competitions organized during the year.

These include the Shaker of Hotel Schools, the Scott Cup, the National Classic Competition and the Flair.

It is worth mentioning that the Barmen Association of France includes the best barmen in the country in its teams, including Christophe Davoine, winner of the "One of the best craftsmen of France" (MOF) contest in the barman category for 2015.

Pisco will have an unprecedented distribution through cocktail-related social media in the country that gave us the Eiffel Tower.

A school with a Peruvian bouquet

France is not the only European country interested in pisco education. In 2019, Brussels launched the first school for training in pisco, El pisco college, which brought together 120 participants with resounding success.

Now France has joined the list, with the second school totally dedicated to pisco. The courses will cover topics such as the market, the varieties of pisco grapes, the production areas and the distillation process.

The aim of the training is to introduce pisco to drink importers, bartenders and international competition judging panels. It will be an important showcase for this fine Peruvian spirit and a chance to make progress for national producers.

As you know, pisco comes from the distillation of juice that comes from 8 varieties in the coastal valleys of Peru. Its diversity of aromas and flavors make it a versatile drink, ideal for cocktails. It also has a Denomination of Origin endorsed by more than 70 countries in the world.

Here you can find some information for the pairing of the different varieties of pisco.

If you want to know more about the work of the Barmen Association of France, you can click here.