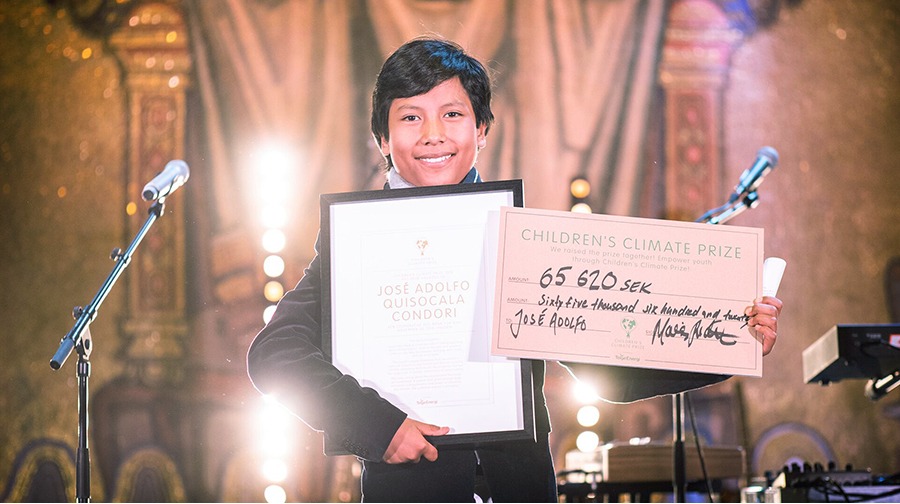 For his great enterprise, his economic vision and his concern for climate change, José Adolfo Quisocala Condori, better known as the young "banker" of Arequipa, was awarded the 'Children's Climate Award 2018', a distinction promoted by Telge Energi in Stockholm, Sweden.

Beating projects from children and young people from countries such as Ukraine, Colombia, the United States and Sweden; José Adolfo Quisocala, only 13 years old, obtained the recognition thanks to the Bartselana Student Bank, a business he founded when he was 7 years old.

The Cooperative Eco - Bank is an initiative that combines economics and climate change. Its operation is based on collecting solid waste from its customers, which is then sold to a paper mill that transforms it into toilet paper. The proceeds of this transaction go directly to the boy's bank account, which can only be withdrawn when the savings target is met. It is important to note that only the customer can withdraw the money saved, not the parents. Children can at the same time take out microloans and pay with recyclable objects.

After receiving the "Children´s Climate Prize" in Stockholm, the boy from Arequipa displayed his happiness and pride through a message in his personal Facebook account: "I am pleased with the award and because I have seen and understood today that children are the hope for tomorrow and our environment. My appreciation to the finalists and all the children who perform little actions to make their countries and our environment great”.

The Jury for the "Children's Climate Prize 2018" contended that the boy, who is about to turn 14 (his birthday is on December 6) should be declared as a candidate for the Nobel award and hopes that he can one day be awarded the Nobel Prize for Economics. For this achievement, José Adolfo received a check for 65,520 SEK, equivalent to approximately 5,500 dollars. This money will be used to ensure his project carries on growing and to advertise the Cooperative Eco - Bank for caring about the environment.

In statements to RPP News, Quisocala Condori said that his project involves children and women and talked about how he runs Cooperative Eco - Bank: "I personally believe in young people, they can do many things; most of my workers are young, apart from that I have advisors for the legal side, in the Economy and Accounting area, which help me make decisions for the project.

"The young banker" said that there are companies and higher education institutions interested in promoting his project and expanding it nationally and internationally: "There are organizations, companies, universities in Chile, Colombia and Mexico that want to take up the idea. So I think 2019 will be a good year for the Student Bank.

Disney to tell the story of the young "banker"

José Adolfo Quisocala Condori's financial project to care for the environment will be represented on the small screen through a documentary produced by the international chain Disney.

This documentary, which will be based on the history of the boy from Arequipa, began recording this year in the Cooperative Eco - Bank offices in Arequipa. Disney also follows the day-to-day life of the young "banker". In an interview prior to the Children's Climate Prize 2018 award ceremony, Quisocala said that the Disney people would also be in Stockholm; he also added that they were in addition  recording for the documentary in New York and London.

This documentary will be ready next year and will be broadcast on Disney Channel. Millions of children and teenagers around the world will be able to see it, allowing it to get airplay and motivating viewers to undertake innovative and socially impactful projects.