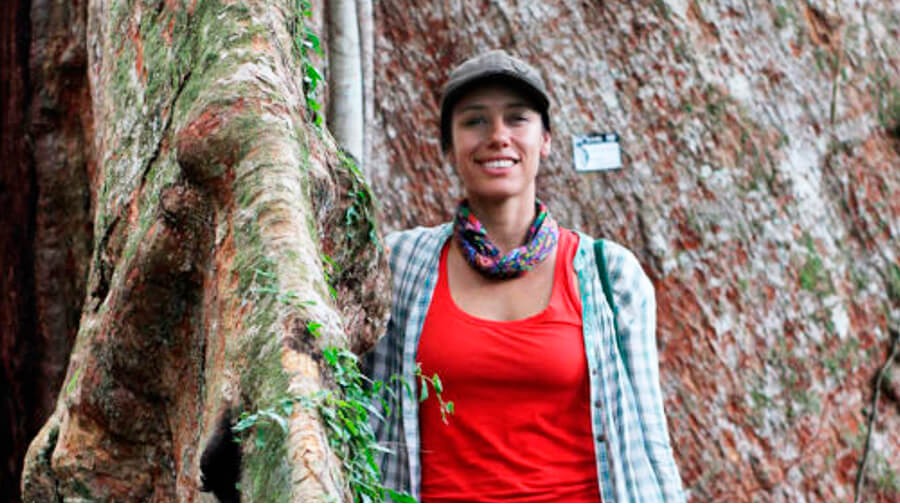 Protecting 2264 acres of the Amazon forest, located in the Las Piedras river basin in Madre de Dios, is the great mission that Peruvian forestry engineer Tatiana Espinosa set herself some years ago. To this end, in 2010 Tatiana and her sisters created Arbio Perú, a non-profit association that seeks to implement conservation actions with the participation of civil society and the private sector.

The work of Tatiana and her NGO to protect the forest was made possible thanks to a concession granted in 2006 by the Peruvian government for the purpose of transforming the area into a place for conservation, research and connection with nature. "Since I was given the concession, I have felt an enormous responsibility. I have promised that I will take care of the trees, that they will remain standing, and I can feel how they protect me. I want to take the forest forward," says our compatriot.

Tatiana and her love for nature

Tatiana has liked nature ever since she was a child, when she played in gardens and climbed trees. When her older sister, now a partner, took her to college, she would wait in the botanical garden. This taste for nature would lead her to pursue her higher education in Forestry Engineering.

She became acquainted with the magic of the forest during the research she conducted for her thesis, when she camped in remote areas of chestnut groves in Madre de Dios. It is there that she discovered her love for the Peruvian Amazon and decided, together with a colleague, to ask the State for the forestry concession of a few hectares to be able to protect areas and endangered species such as the shihuahuaco, an imposing and long-lived tree that takes more than 800 years for its trunk to reach barely 3.3 ft in diameter. It is also home to the harpy eagle, the largest bird of prey in the Americas.

In 2010, after finishing her Master's degree in Costa Rica, she returned to Peru with the firm idea of creating an association to protect the Amazon from the threats it faces on a daily basis, such as illegal logging and the expansion of monoculture plantations.

Her efforts and love for nature have made her the first Latin American to be recognized with the Jane Goodall Hope and Inspiration Ranger Award. This award, which is dedicated to those who have become an inspiration through their work in environmental conservation, protecting natural areas and endangered species, is awarded by The Thin Green Line Foundation in association with The International Ranger Federation.

"The award highlights the importance of conserving the Amazon forest and working with this ecosystem in a sustainable way. It is an incentive to continue this battle," says Tatiana, who is accredited by the International Analog Forestry Network as a trainer in Analog Forestry for forest restoration.

The award was confirmed by Sean Wilmore, president of the International Ranger Federation, who said the award will be given at a ceremony to be held in November 2019 in Nepal.

Hand in hand with technology

Protecting threatened forests in the Amazon is not an easy task and Tatiana knows this very well; that is why Tatiana and her partners in Arbio launched an online platform in 2012 for people around the world to adopt hectares of forest as a form of funding.

This year, they also created a tree adoption system to make the connection with nature much more direct. In Arbio, 200 trees have been identified among species such as the red quinilla, the machinga, the catahua, the lupuna and, of course, the shihuahuaco.

"We invite people and companies to adopt hectares of forest and trees so that together we can do something for the Amazon, which occupies 60% of our territory," says Espinosa.

The award is named after Jane Goodall, a world-renowned primate researcher and ambassador to the International Ranger Federation.