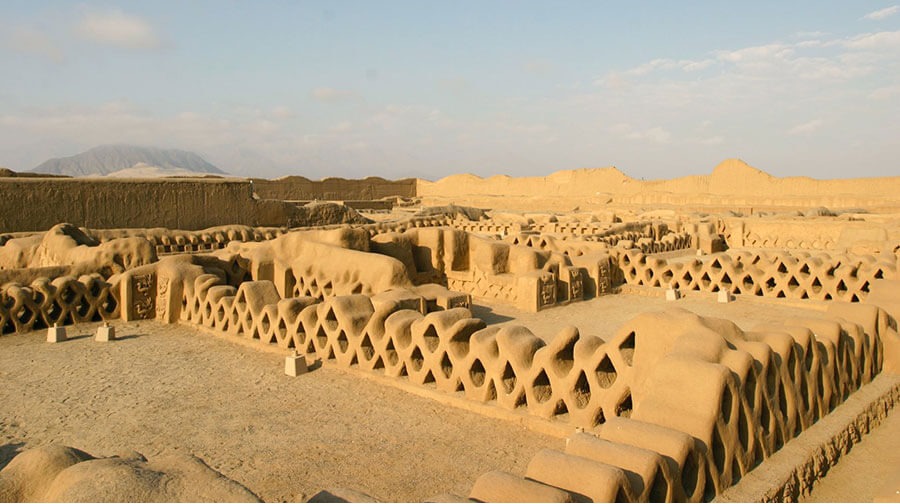 Chan Chan, the biggest adobe city in the Americas, is found on Peru's northern coast, in the Trujillo Province, in the Department of La Libertad. It is a World Heritage Site owing to its immense historic value and significance, and it has become a major tourist destination for national and international visitors.

It was the capital of the Chimú culture, which flourished on the northern coast of Peru between 850 and 1470 AD. In that period, Chan Chan managed to achieve a high level of economic, social and urban development. It was later conquered by the Incas, and then raided by the Spanish.

The central area of Chan Chan comprises ten extravagant walled citadels. Its walls are decorated in high relief with geometric motifs and shapes of fish and birds. What's more, spectacular architectural designs can be seen, such as working class districts, city walls, sidewalks, canals and cemeteries.

Thanks to its exceptional universal values and its unique testimony to a vanished civilization, the Chan Chan Archaeological Zone was declared a World Heritage Site by the United Nations Educational, Scientific and Cultural Organization (UNESCO) in 1986.

Chan Chan is estimated to have had a population of between 20 and 30 thousand inhabitants.  Its buildings, which are architectural masterpieces, served as warehouses, residences, mausoleums, administrative centers and temples.

The Nik An palace (previously known as Tschudi) has undergone the most restoration work and is the only building open to visitors. This palace is characterized by its thick 10-meter-high walls - architecture specially designed to withstand earthquakes. In addition, and despite being built in one of the driest climates in Peru, crops and gardens were fertilized using an advanced irrigation system.

At the Tourist Center, at the entrance to the archaeological site, there are souvenir and craft shops displaying craft products.

A visit to the Chan Chan ruins guarantees tourists an unforgettable experience. During the tour you will discover the vestiges of one of Peru's oldest cultures. Its impressive and ingenious architecture is without a doubt one of its main attractions. Don't miss the opportunity to visit Chan Chan, in the north of Peru!