The famous Shipibo art of the Peruvian jungle 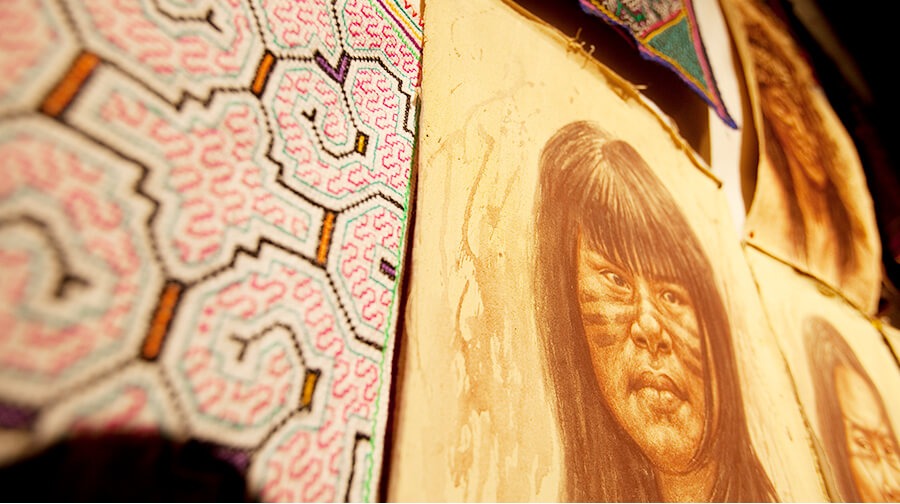 Shipibo art is one of the most representative cultural expressions of the Peruvian Amazon. Its ceramics, carvings, jewelry and textiles are made with techniques and rituals that were handed down from generation to generation. Shipibo women produce most of the handicrafts, with outstanding designs representing the Shipibo cosmology.

A clear example of their originality can be seen in their textiles, having great artistic richness due to their decoration with geometric patterns and their coloring with natural polychrome dyes. It is known that the shipibos take ayahuasca to make these handcrafted textiles or shawls, a hallucinogenic drug with which they visualize the forms and designs in their mind, and which later take shape in their final creation. Every detail of the textiles they make has a meaning that might represent rivers, lakes and villages in the area. For the Shipibos, making textiles is part of a cosmology that they are proud of. It is important to note that it takes about three months on average to make a shawl that can cost up to 1,000 soles in the current market.

With respect to their ceramics, this is considered a mystical activity that reflects their cosmology and their harmonious coexistence with their surroundings, their philosophy and daily practices. They are formed by outstanding handcrafted parts, crafted traditionally and with materials from the region, the use of clay predominating as the main material.

"Kené" means "design" in the Shipibo-conibo language. A characteristic design system that is expressed in fabrics, woods and ceramics. The practice of kené involves painting, embroidering or weaving designs, being a feminine art that is passed down from mother to daughter and that uses materials derived from the forest and the chacras.

Kené motifs have their origin in the Shipibos' cosmology and, according to their ancestral belief, are inspired by the anaconda, which would combine all the motif variations on its skin. To be able to produce these designs, the Shipibo-conibo consider it necessary to take plants that manifest the power of the anaconda: the rao and ayahuasca plants.

Kené designs are important for this community because of their important role in the shamanic tourism market. They also adorn objects sold by Shipibo women. In 2008, Kené designs were declared National Cultural Heritage.

They are an ethnic group from the Peruvian Amazon , in an area located on the banks of the Ucayali River. The identity of the Shipibo-Conibo is related to their language, history, territory and art. Apart from their great traditional culture, they have developed other artistic expressions in the last few decades such as painting, music and audiovisual production, with some very high quality products.

Shipibo-konibo shamans are internationally famous. Many people come from other countries to be cured or to learn from their wisdom.